(Or, how not to shoot each other down!)

The Club operates a ‘Peg on the board’ system.

The club revised its rules regarding the use of the pegboard in 2015. Since there is now a preponderance of members using 2.4GHz where there is no risk of one member’s transmitter affecting anothers it has been decided that they need not use the pegboard. However, any member who is still using 35MHz MUST still make use of the pegboard. Therefore, the first person arriving who intends to use 35MHz is responsible for taking the pegboard out to the pit area and must place their peg on the appropriate frequency. The last member using 35MHz is responsible for returning the pegboard when they leave. Members should ensure that their peg(s) are clearly marked with their name and channel number. 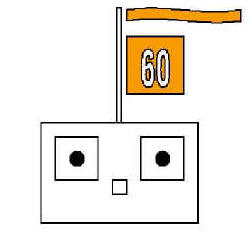 Members are reminded to put an orange pendent and a frequency number tag on their transmitter. Don’t forget, both are actually required by the BMFA rulebook and are as important as proper use of the pegboard. The two are linked, check the peg, and then visually check the transmitters present before switching on! OF COURSE, ONCE YOU HAVE FINISHED FLYING, TAKE YOUR PEG OFF THE BOARD!

Pilots, Where to Stand and Transmitters.

The general rule, “All pilots to stand in the same place” applies. This is to ensure that communication between pilots is easily achieved and permission from others already flying can be sought to take off, land or to announce a dead stick landing. Confirmation from the other pilots should also be sought before venturing into the ‘circle’ to retrieve a plane once landed. Communication between pilots is essential This is now a little confusion in that we have a separately designated area for flying helicopters and multi rotor machines from that of fixed wing planes. However, as the flying areas are delineated to ensure the two disciples have their own designated flying areas there should be no problems between the two groups. The pilots of fixed wing vehicles should all stand in the same area together and the multi rotor pilots should stand together in their own area such that they can communicate with each other. PLEASE READ THE SAFETY RULES FOR FULL DETAILS OF THE REQUIREMENTS.

We must all remember that only 6 pilots and their fixed wing aircraft should be airborne at once, and all in easy hearing distance to each other so that the appropriate calls can be clearly heard. Thus if a glider pilot is about to launch he can inform the other pilots of his intentions, and that for those moments the power pilots should avoid the bungee, both on the upward climb and on the chute assisted decent. Also, discuss together the positioning of the bungee and that days best place to land. The committee believe the mown patch to be easily wide enough to have the line of landing for power and the bungee parallel, thus vastly reducing the chance of damage to the bungee. Helicopter and multi rotor vehicle pilots should agree amongst themselves the maximum number of models flown at any one time dependant upon their activities